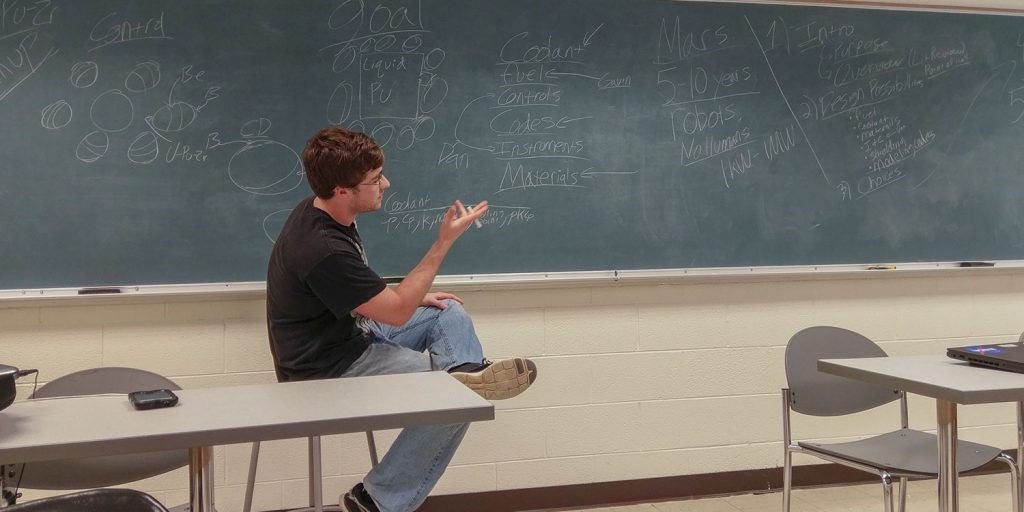 A team of nuclear engineering students took up the senior design project challenge of providing power for extraterrestrial surface missions—namely, a trip to Mars.

“I think the group was, in general, inspired by the radical departure that space reactor concepts can take from terrestrial atomic power in favor of high-power densities and long operating lifetimes,” said Ridley. “This presents a very interesting technological challenge, since such power generation has to be delivered in a lightweight package.”

The cost of sending a kilogram of equipment to Mars can soar well into six digits, so a lighter design saves dollars.

“Moreover, people can’t easily go to check up on the reactor like on Earth,” said Ridley. “You have to make many decisions on how the reactor can be monitored, maintained, and controlled remotely.”

They found that one of the biggest lessons of the project was in how nuanced computational fluid dynamics can be.

“Generating a good mesh, using the right turbulence models, and setting the right boundary conditions seem at times to be such mathematically difficult problems that it’s more of an art than anything,” said Ridley.

PULSR illustrated design shows radiator panels spanning horizontally across the top and attached to a cage about 2 meters tall. The cage houses a sodium electromagnetic pump, wedge control drums, Na heat exchanger, SCRAM motors, the core assembly, and control drum motors.The team chose to spice up the design by using excess weapons-grade plutonium as fuel. They chose this partly as a symbol of peace—repurposing the material for progress rather than destruction—and partly due to its extraordinary potential as space-reactor fuel. They packed it into a spherical container made of tantaloy, with sodium coolant flowing over it to remove heat.

“The biggest challenge was finding data to back up the fact that there are metals which are corrosion-resistant to liquid plutonium-based fuel,” said Ridley. “We would have not undertaken these design decisions if Los Alamos national lab had not explored liquid plutonium-based fuels as a fast reactor concept in the 1960s.”
Still, it was challenging to design a thermal-spectrum reactor which operates on nearly pure Pu-239 and maintains stability.

“We think the design is a success because our calculations show it will be stable and continuously make 20 kilowatts of power over a 20-year lifespan,” said Ridley. “Best of all, it will fit in a package weighing in around 60 kilograms.”

We are now accepting applications for Interdisciplinary Senior Design.

Rising senior business and engineering students are encouaged to apply.

The University of Tennessee

The flagship campus of the University of Tennessee System and partner in the Tennessee Transfer Pathway.